Easy to grow and very tolerant of a variety of conditions, your garden need this raspberry variety.


Joan J is a cross between Joan Squire and Terri-Louise. It was bred to rival Autumn Bliss (which it beats hands down every time) and was awarded an AGM in 2009. 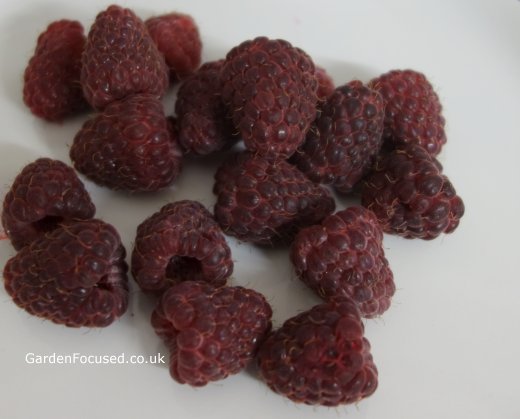 Joan J raspberries are larger than average, longer rather than wider. The colour is just what you expect from a top quality raspberry, deep red. Avoid picking those which are strawberry coloured, they are not yet ripe. The fruits do tend to hide behind the large leaves but that's half the fun.

As far as taste goes, Joan J is packed full of flavour. Compare it to Autumn Bliss or Fallgold and you will understand that simply being sweet is not the best you can grow. Joan J is sweet but also so full of raspberry flavour.

On our clay soil they are not the the lowest growing of autumn rasberries and may need it a bit of support, maybe a cane per plant. But even without support they manage to stay off the ground in even the strongest of winds. They have no special care needs aside from those given to normal varieties. They seem to prefer being in shade at the hottest part of the day. They tolerate part shade very well.

To get the best from them, mulch well, very well, to conserve water at the the shallow roots. Much similar conditions to most raspberry varieties.

The cropping period lasts from mid August to mid October in the West Midlands. Don't pile the fruits up high in a container when you harvest them because they will squash the ones on the bottom layers.


This is often available at garden centres. They are also available online at several specialist growers however and you can expect to pay about £1 per cane - they are no more expensive compared to other varieties.

Raspberry canes should be planted at the same depth as they were originally grown at - the canes should have a soil mark round the base to indicate this. The best time to buy and plant them is from November to March. They may well need watering if conditions are dry but from then on a good mulch and a feed twice a year is all that they should need

USE: Eating only, they are too delicious to use for jams!

TASTE AND TEXTURE: Soft with a full, sweet raspberry flavour