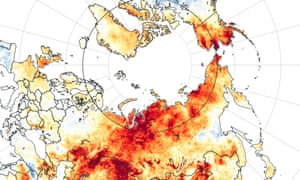 The Arctic and northern Siberia saw particularly extreme average temperatures in 2020, with a large region 3C higher than the long-term average. Photograph: Nasa/EPA

The climate crisis continued unabated in 2020, with the joint highest global temperatures on record, alarming heat and record wildfires in the Arctic, and a record 29 tropical storms in the Atlantic.

Despite a 7% fall in fossil fuel burning due to coronavirus lockdowns, heat-trapping carbon dioxide continued to build up in the atmosphere, also setting a new record. The average surface temperature across the planet in 2020 was 1.25C higher than in the pre-industrial period of 1850-1900, dangerously close to the 1.5C target set by the world’s nations to avoid the worst impacts. 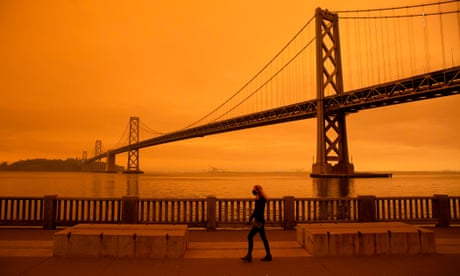 Only 2016 matched the heat in 2020, but that year saw a natural El Niño climate event which boosts temperatures. Without that it is likely 2020 would have been the outright hottest year. Scientists have warned that without urgent action the future for many millions of people “looks black”.

The temperature data released by the European Union’s Copernicus Climate Change Service (C3S) showed that the past six years have been the hottest six on record. They also showed that Europe saw its hottest year on record, 1.6C above the long-term average, with a searing heatwave hitting western Europe in late July and early August.

The Arctic and northern Siberia saw particularly extreme average temperatures in 2020, with a large region 3C higher than the long-term average and some locations more than 6C higher. This resulted in extensive wildfires, with a record 244m tonnes of CO2 released within the Arctic Circle. Arctic sea ice was also significantly lower, with July and October seeing the smallest extent on record for those months.

“[The yearhttps://www.theguardian.com/world/arctic" class="u-underline" style="background: transparent; touch-action: manipulation; color: rgb(171, 6, 19); cursor: pointer; border-bottom: 0.0625rem solid rgb(220, 220, 220); transition: border-color 0.15s ease-out 0s; text-decoration-line: none !important;" data-link-name="auto-linked-tag" data-component="auto-linked-tag">Arctic,” said Carlo Buontempo, director of C3S. “It is no surprise that the last decade was the warmest on record, and is yet another reminder of the urgency of ambitious emissions reductions to prevent adverse climate impacts.”

“The extraordinary climate events of 2020 show us we have no time to lose,” said Matthias Petschke, at the European commission. “It will be difficult, but the cost of inaction is too great.” 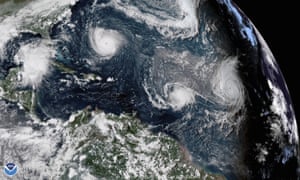 FacebookTwitterPinterest
A record 29 tropical storms formed in the Atlantic Ocean in 2020. Photograph: AP

The level of CO2 in the atmosphere reached a new record in 2020, with the cut in emissions due to Covid lockdowns described as a “tiny blip” by the UN’s World Meteorological Organisation. Vincent-Henri Peuch, director of the Copernicus Atmosphere Monitoring Service, said: “Until the net global emissions reduce to zero, CO2 will continue to accumulate in the atmosphere and drive further climate change.”

The UK Met Office issued a forecast on Friday that CO2 levels will pass a new milestone in 2021 – being 50% higher than before the Industrial Revolution. Its scientists said CO2 will exceed 417 parts per million (ppm) for several weeks from April to June, which is 50% higher than the 278 ppm in the late 18th century when industrial activity began.

This is despite the expectation that weather conditions brought by the counterpart of El Niño, La Niña, will see higher natural growth in tropical forests that will soak up some of humanity’s emissions.

“The human-caused buildup of CO2 in the atmosphere is accelerating,” said Prof Richard Betts at the Met Office. “It took over 200 years for levels to increase by 25%, but now just over 30 years later we are approaching a 50% increase. Global emissions will need to be brought down to net zero within about the next 30 years if global warming is to be limited to 1.5C.”